Rushkoff Cringes About Our "Digital Nation"

I am sure that not enough people watched the new Frontline documentary film Digital Nation by Douglas Rushkoff last week. If you watched the show you would know why nobody else was watching it. Everyone is online or otherwise just too busy to sit and watch a 90 minute documentary on live TV.

Sure you could watch the film online as it was being produced over the past year. The producers even posted rough cut footage as they shot it and gained feedback from viewers. Video blogs sent by visitors actually made it into the final version of the film. But, I didn't even know this film was in process and I'm on Rushkoff's mailing list! I literally happened upon it while channel surfing through our local PBS station KQED-TV late that night.

Really, who watches live TV any more? OK, 106 million people watched the Super Bowl, but what else?
If you watch the Frontline show "Digital Nation" you will see something amazing. Rushkoff has spent the last two plus decades promoting the uses and benefits of technology in our lives (we used to use the word evangelizing . . . I'm glad people have stopped using that word). Rushkoff has written extensively and produced several documentaries about virtual worlds and the future of a society and a world immersed with technology in our daily lives. His last Frontline piece called "Growing Up Online" explores how young people spend their time online every day.

In Digital Nation you see him literally cringing at different points in the show as he witnesses (and brings us face to face) with many of the problems technology creates for us as humans and for our society. At one point early in the show he is almost apologizing for his previous work promoting technology.
However, as Rushkoff points out some of the pitfalls in the way we use technology in our lives, he also draws our attention to success. For example, one middle school in New York was literally saved from itself when laptops were introduced into an environment that was spiraling out of control. Then we get the chance to watch the vice principal monitoring student screens. We see them off task looking at themselves in the "mirror" of the built in web cam doing their hair. They are also chatting online, watching You Tube videos, and playing computer games. Everything except what they are supposed to be doing. In the end, I believe you could argue that this particular school community is better off dealing with those problems then the ones they had before computers were introduced (fights, gangs, drop outs, and school wide dismal academic achievement).
This conversation brings me back to something I wrote last year when discussing technology and literacy and how it made me think of the National Rifle Association's slogan. The key word in this conversation is how we use the technology. "Technology doesn't make people stupid, people using technology makes people stupid."
To me the lesson for us is that people, especially parents and educators, need to promote a balance of integrating technology and not. The benefits for learning are obvious and many. The pitfalls are also obvious and many. I believe it is possible to draw ourselves into a place where we can gain most, if not all, of the benefits of technology and maintain a semblance of order that allows us to reach our goals as educators and people without turning into mindless consumers of digital entertainment.

As Rushkoff says "The trick, at least for me, is to unplug from the digital for long enough to regain my bearings; re-establish myself as an organic life form, primarily, and a virtual presence only secondarily.  And during those interludes, to remember what it is I want in the first place -- for myself, my loved ones, and my society."

Unless we get to that point we are most certainly in trouble as a society and the human race. Perhaps one day we can say that we helped society reach a place where the use of technology does not turn into an all-encompassing world that keeps us from being who we really are -- human.

Posted by Brad Lakritz at 8:24 PM No comments:

When I was a kid my brothers and I went outside with our friends and built forts out of huge tumbleweeds. We rode our bikes out in the country along the irrigation ditches and dove into the water to cool off from the hot Summer sun. When it was time to eat our parents went outside and yelled for us to come home. It was a big event to go to the big Fox Theater downtown to see a movie. When I think about it those were very good times. If there were a computer invented at that time we didn't know about it until 2001 - A Space Odyssey came out in 1968. I was eight years old at the time.

In college I used a Tandy (Radio Shack) computer a roommate of mine had to write my term papers  --  when I wasn't typing them on a typewriter. We used to go to the student center and play pinball at a quarter a pop. Sure, it was a game but it was physical. You had to go someplace where they had the machine and we had to use our body to make the game go. No couch potato for us. 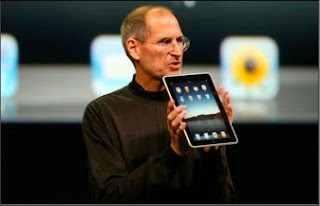 The pervasive technology we now have has helped us improve life in so many areas it's hard to complain about it's overall impact on our lives and our society and the world as a whole. Things change, sure, but how do we know they've changed for the better?

Last week I began to wonder how Steve Jobs sleeps at night. We heard about how he believed this would possibly be the greatest new technology he had ever introduced. When you look at the new iPad it seems pretty obvious that Jobs and Apple have created one of the greatest portable gaming machines every invented. And, when users aren't playing games on this device they will most certainly be consuming other media. What happened to creating insanely great devices that help people communicate their ideas? Is Apple giving that up? Between the iPod, iPhone, and now the iPad the vast majority of their product line is now a consumers paradise.

It turns out things are as bad as they looked when I wrote about how many hours the average 21 year old in the US spends consuming media (through technology) in their lives. A new study (one of the largest and most comprehensive publicly available sources of information on the amount and nature of media use by American youth) describes in detail how "media are among the most powerful forces in young people's lives today."

According to the New York Times, this study by the Kaiser Family Foundation, reports that the "average young American now spends practically every waking minute -- except for the time in school -- using a smart phone, computer, television or other electronic device." The evidence indicates a correlation between media consumption and behavior problems and lower grades. "47% of the heaviest media users -- those who consumed at least 16 hours a day -- had mostly C's or lower compared with just 23 percent of those who consumed media for three hours a day or less."

This is the third installment in a long term Kaiser study. When they last reported media use statistics five years ago the authors felt they had reached a ceiling and that young people couldn't possibly be consuming even more media per day than before. Now however, with the advent of portable digital devices many youth are interacting with multiple electronic devices at any given time thereby doubling the number of hours spent with media each time they use more than one device.

"This is a stunner." said Donald F. Roberts, a Stanford communications professor emeritus who is one of the authors of the study. "In the second report, I remember writing a paragraph saying we've hit a ceiling on media use, since there just aren't enough hours in the day to increase the time children spent on media. Now it's up an hour."

To me the scariest part of this discussion is the impact of multi-tasking with media. Media publishers now integrate multiple, complex information sources on any given screen. Our brains must sift through all the information (pictures, text, animations, pop-ups, etc.) and capture what it needs to help us understand what we are watching. Even PBS does this.

Kind of makes me want to go on an outing . . . give me a beautiful redwood forrest please. I'm feeling like I need to get outside.
Posted by Brad Lakritz at 8:31 PM No comments: