Is Your Brain Or Your Life Evolving Because of Technology?

Matt Richtel, New York Times Technology correspondent, won a Pulitzer Prize for his 2009 series on new technology and it's impact on driving and multitasking. Now he's taking on evolution with claims that research is showing that all this time we spend with technology is changing the chemical and physiological nature of the human brain.

In his June essay "Your Brain on Computers" Richtel proclaims "Scientist say juggling e-mail, phone calls and other incoming information can change how people think and behave. They say our ability to focus is being undermined by bursts of information." And, "these (distractions) can inflict nicks and cuts on creativity and deep thought, interrupting work and family life."

Richtel quotes scientists who are "discovering that even after multitasking ends, fractured thinking and a lack of focus persist." Scientists are using the phrase "rewiring our brain" to describe what they claim is an evolutionary change in our brain activity.

"For better or worse, the consumption of media, as varied as E-mail and TV, has exploded" says Ricthel. "In 2008, people consumed three times as much information each day as they did in 1960. And they are constantly shifting their attention. Computer users at work change windows or check E-mail or other programs nearly 37 times an hour, new research shows."

"We are exposing our brains to an environment and asking them to do things we weren't necessarily evolved to do," says Adam Gazzaley, a neuroscientist at the University of California, San Francisco, "We know already there are consequences."

What exactly are those consequences? That's what I want to know and I want us to all think and talk about. What exactly are we gaining and what are we giving up when we spend all this time "online?" I don't really want to know if my brain is evolving I just want to know what's happening in my life and the lives of my friends and family as a result of all the time we spend being interacting with screens.

Gazzaley isn't actually saying he knows the brain has evolved in the last 40 years as a result of technology. He says our brain isn't "necessarily evolved" to deal with all this information. That's a pretty weak claim in my opinion. What are some of the conclusions we can make?

We can look at all these technological distractions and quantify how much time we aren't spending with our family or friends. You have to do that for yourself. Read Richtel's article and see for yourself how much your life mirrors that of the family he follows.

We can quantify the incredible increase in the incidence of obesity in the US. According to the Journal of the American Medical Association the prevalence of obesity in adults had increased 8 percent in adults in the United States between 1988 and 1994 after being relatively stable between 1960 - 1980. "Analyses of data from 1999-2000 showed further increases in obesity for both men and women in all age groups."

We can quantify how much less time we are spending outside.

Obviously the nature of the food we eat has a great impact on the health of our bodies and obesity rates but I would claim that our time spent in front of screens has a great impact on our overall health as a nation. It turns out that research now shows people feel better when they spend more time outside. "We have a natural connection with living things" says University of Rochester professor of psychology Richard Ryan. "Nature is something within which we flourish," says Ryan, "so having it be more a part of our lives is critical, especially when we live and work in built environments."

Having just spent a few days hiking in the Rocky Mountain National Park this Summer I can agree. Here I am with my wife Dena near the end of a difficult 6.5 mile hike. We were tired and our bodies sore. But we were happy and we felt good! 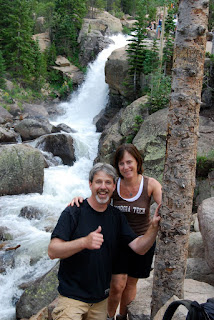 Richtel does back off a bit from the evolutionary claims by quoting Steven Yantis, a professor of brain sciences at Johns Hopkins University. "The bottom line is, the brain is wired to adapt," says Yantis. "There is no question that rewiring goes on all the time" Yantis concludes. Richtel then admits that it is not clear if changes from interaction with technology are different from other changes in the past.

We can fight this change if we want. Anne Lamott wrote a beautiful piece on Finding Time in the April 2010 edition of Sunset Magazine. She challenges us to think about taking time out from all the "busyness" in our lives to explore our own humanity.

Let's all remember that the technology is here to help us be human and not simply to take up all our waking hours. That way perhaps we can evolve the use of technology to suit our needs as a species rather than it change our nature.