Digital Forgiveness vs. The End of Forgetting

We all know the Drunken Pirate story of the woman who lost the opportunity to obtain a teaching degree because of a photo on her online social networking profile. While most of us don't know, or can't remember her name, Stacy Snyder knows that "the Internet" won't ever forget her. A seminal event in modern culture, Snyder's denial of a teaching degree by the Millersville University School of Education and the US district judge that upheld that decision, are two stories that will be remembered by many as the moment of proof that privacy doesn't exist on the Internet.

I've been thinking about this topic recently after reading Jeffrey Rosen's article in the NY Times "The Web Means the End of Forgetting."

"We’ve known for years that the Web allows for unprecedented voyeurism, exhibitionism and inadvertent indiscretion, but we are only beginning to understand the costs of an age in which so much of what we say, and of what others say about us, goes into our permanent — and public — digital files. The fact that the Internet never seems to forget is threatening, at an almost existential level, our ability to control our identities; to preserve the option of reinventing ourselves and starting anew; to overcome our checkered pasts."

These ideas hit home when I came across this photo of myself taken by my daughter a few weeks ago. In it I believe I look a little bit like the "nutty" or "absent-minded" professor with my hair and posture. 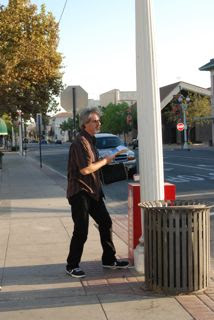 When I first saw the photo I thought I would just delete it and nobody would have ever seen it. Then I thought, what if someone had seen it? What if someone else had taken this photo and decided to publish it without my consent? How would I feel about it. When I saw the next photo in the series I felt much better about myself and thought I don't look so terrible after all. Still, the first photo doesn't lie about me. That is what I looked like at that moment when the picture was taken. At any time someone could publish a photo of me just like that. 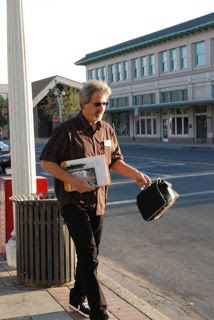 This is, of course, simply an exercise in my own desire to control my personal identity on the Internet. Whereas I might teach others about the need to publish one's own social networking site in order to control how people see you. Increasingly it is obvious that, with the advent of digital recording devices, people can (and do) publish images and video of just about anything they can point their lens at.

Is it naive to still believe that if you work to stay on top of your identity you can prevent any negative images or publications about you? Can new services help you defend your reputation, remove unsightly images, and clean up your digital personality?

One other idea that comes forward in these thoughts is the fact that identity can be manufactured by the user as well. This is where we started on the Internet with people creating fake or embellished identities. The fear associated with digital prowlers seems to have subsided a bit as we now point our attention to protecting our own online identities.


". . . the future of our online identities and reputations will ultimately be shaped not just by laws and technologies but also by changing social norms. And norms are already developing to recreate off-the-record spaces in public, with no photos, Twitter posts or blogging allowed. Milk and Honey, an exclusive bar on Manhattan’s Lower East Side, requires potential members to sign an agreement promising not to blog about the bar’s goings on or to post photos on social-networking sites, and other bars and nightclubs are adopting similar policies. I’ve been at dinners recently where someone has requested, in all seriousness, “Please don’t tweet this” — a custom that is likely to spread."

At the end of my 50th birthday party a few people stayed afterward to hang out and enjoy a more intimate time singing and playing a guitar. I handed someone a Flip video camera to record some of the fun. One of the group kept hiding his face in order to "protect my identity." It was a sign to me that posting such video online would be off limits. At the same time, everyone at the party fully expected to see themselves online the next day. One friend jokingly complained that there was no photo of her in my online album. Being able to read these signals is a dicey skill that we are all learning now.

Digital memories are growing. Forgetting them may not be as easy as we think.