I am flying to Detroit on my Spring Break to do some family history research I can't do anywhere else . . . yet. I have been successful over the years in piecing together some interesting information by researching my ancestors through a variety of online resources. 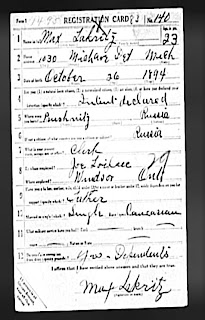 And, I recently found a list of people who received marriage certificatesin Detroit in 1923: 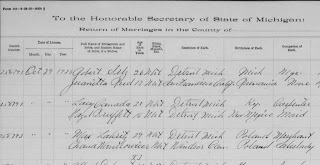 It truly is amazing what you can find online these days. But there are still so much data not available.

One thing I hope to find on this trip is a listing of a border crossing from Canada to the United States for my grandfather Max. I was able to locate the fact that this document exists by searching the FamilySearch.org website.

In fact, I know the name of the publication, the publication number, and the roll number of the microfiche where the document is recorded from FamilySearch.org. I am hoping I can find the actual film at the reference desk of main public library in Windsor, Ontario Canada.

What is really cracking me up at the moment, though, is the fact that I can write this blog (assuming my battery lasts) while actually flying to Detroit at 35,000 feet. As I am sure most of you jet-setters already know you can get online while flying now. Who knew?! 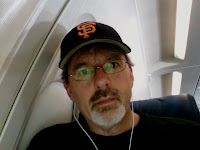 Flying Delta Airlines this time I decided to pay the $13/flight fee for the right to be online using the GoGo Inflight wireless service. I've tweeted, updated my Facebook, checked and replied to a few of my E-mails, and now I'm blogging.

I'm down to about 30% of my battery right now (somewhere over Iowa). I don't think I'll quite make it to Detroit which is a shame considering the little guy behind me is kicking the heck out of the back of my chair and his little brother is crying pretty loudly. Right now the Wallflowers, Bonnie Raitt, and this blog is getting me through the in-cabin turbulence.

I suppose this is a great way to make it through the 5 hour flight in the future. Of course next time I will probably be flying with all of the family and we'll need to get some sort of package deal or it's going to break the bank.

Or, maybe I won't have to fly there next time to get this information. I'll just call it up in my browser and download it straight away.

Wouldn't that be nice? Seems a bit more sustainable to me. I've got to remember to pay off some of my carbon footprint for this little journey.

For now I'm just grateful for this innovation.
Posted by Brad Lakritz at 4:11 PM 1 comment:

The End of More Than an Era - Say Goodbye to Kodachrome

In mid-2009 Kodak announced the end of nearly 75 years of production of Kodachrome film. Kodachrome was not just the subject of a famous Paul Simon song. It revolutionized photography on so many levels. In a 2009 NPR interview National Geographic photographer Steve McCurry explains that Kodachrome "was a beautiful film, the tonal range was extraordinary, the vivid colors were legendary."

McCurry, who shot more than 800,000 images using Kodachrome film during his career, was chosen by Kodak to shoot the very last roll of Kodachrome film. The 36 exposures he made in the Summer of 2010 appeared February 9, 2011 in an exclusive web article by Vanity Fair magazine.

The images are stunning for their quality as well as the subjects he chose to capture with these final few frames of precious film stock. McCurry switched between New York City street scenes and shots of actor Robert DeNiro, a series of images of Indian film stars and Ribari tribal elders in India, and finished up the roll with a few images taken in Parsons, Kansas home of the last photo shop in the world that developed Kodachrome film.

I was fortunate enough to shoot a few rolls of Kodachrome film in my early days of photography. Back in the 1970s it was common for people to shoot much of their family pictures on slide film. We would gather from time to time with the slide projector and a carousel loaded up with 80 slides to watch the images on a small screen or blank wall in the house.

My career as a photographer began in earnest in the Summer of 1974 when I took my first photo class with Waldo Larson at Hanford High School. Sadly, most of the images I captured in those days don't exist any more. And those that still exist are badly damaged from years of neglect.

When I heard about the demise of Kodachrome I wondered about those old photographs. I did have the foresight to save most of my negatives and slides over the years and I am fortunate enough to have access to a Nikon slide/negative scanner. Last month I spent some time exploring some of these old images in the digital realm. I didn't know what to expect but the results were amazing.

Some of the first shots I found were actually some of the first film I ever shot, developed, and printed by myself. Scratched and damaged they still revealed a world of my youth, the town where I grew up, and my high school. This shot of the old main building at Hanford High School is amazing because most people today don't even know that it existed. Some of the older people in town will remember it and the shock that occurred when it was torn down and replaced with the modern brown brick building that is there today. This photo was taken just days or perhaps even hours before it's destruction.

I recall the difficulty the destruction crew had in taking down those beautiful pillars. They were pounding on them with a wrecking ball for hours and hours and the pillars refused to go. Of course they ultimately did go down and I was so amazed at the spectacle of it that I took this picture after they were done.

I found a few other interesting images from this era. There were a set of portraits I took of classmates that includes a wonderful self-portrait:


There are so many wonderful aspects to these images. They capture the innocence of our youth and they provide a surprising moment of remembering people you used to know so long ago, and wondering what they are up to now. More people to look up on Facebook!


There was also the realization that I once learned the basics of studio photography from one of my favorite teachers in high school. Of course there was also a wonderful feeling around the fact that these images still exist today and that, through technology, I can capture them again to a digital world.

Getting back to Kodachrome again it truly is amazing the quality of that film. We have surrendered our photographic work to digital cameras now and we rarely print them to paper any more. But how different is that from the days when we shot slides and only looked at them when we took the time to put the carousel on the projector and viewed them on the living room wall?

I suppose it doesn't matter. What matters is that we take the time to view them and to enjoy them for what they are: a capturing of a moment in time, a colorful picture worthy of framing, or simply something to put on the refrigerator.


I am just glad I have them. I am glad to have been able to shoot with Kodachrome in a non-digital camera environment. In a short time, if not already, Kodachrome won't even be missed.