In the early 1940’s Simon Lakritz moved from the gritty streets of Detroit to the wild west of Tucson, Arizona. His parents were divorced so he traveled to the Southwest with his mom and siblings. Life was pretty tough during those years. He had no friends, didn’t do well in school, and he had no sense of what his future would hold.

This is when Si met his life long friends Larry Fishman, Harry Nadler, Jordan Zipren, and Buddy Jens. AZA Chapter 457 was to help him get through the awkward days of high school and ultimately into the University of Arizona.

“There were several areas of interest in AZA” Si wrote, “including athletics, community service, and above all social events. It was a chance to be part of something.”

According to Si, the 1951 AZA Chapter 457 baseball team had a “murderer’s row” of hitters.

On one particular day they swept a double header against the Al Jolson AZA Chapter taking the night cap 17 - 5. The Alephs were on their way to defending the Mountain Region championship they captured the year before.

20 years later Si was my Little League coach during those same critical years of my youth. They were important times for me and my older brother Jeff who played on the same team.

Father and sons together on the diamond brought many exciting moments including one season when we went: “From Last to First . . . Almost.” We tied for first with CVC but lost the league championship on a tiebreaker.

I am still friends with most of the people from both those teams more than forty years later.


I began my own official coaching career in 2004 with my son Noah. I coached his teams for six years from Little League to Babe Ruth including five all star and travel teams. What a wonderful experience we had together as father and son. The whole family had fun with those teams, the many exciting moments on the field, and all the trips to tournaments throughout Northern California. We met many of our good friends from all those games and tournaments and even the little league parade. Some of Noah’s best friends are from those experiences.

During that time I also joined and even became the manager of an adult softball team for six years. Interestingly, about half of the players on that team were Jewish. This provided a great outlet for exercise and fun but it was also a way to meet and hang out with new friends each week.

Eventually that team was too difficult to keep going as schedules made it impossible for everyone to commit to play even just one game a week during a 10 week season.

So, I took a few years off from the regular softball schedule until one day I read in The J Weekly that Matt Elkins had started up a team at Congregation Rodef Sholom.

They had a maiden voyage in August 2011 with a game against a team from Congregation Kol Shofar. Matt’s dream was to put together a Jewish softball league of teams throughout the Bay Area. “Wow,” I thought, “just like my Dad’s AZA league in Arizona we could have our own Jewish league right here in Northern California.” I signed up as soon as I could.

We’ve played about 15 games in the last two years with games against Congregation Kol Shofar and Congregation Emanu-El from San Francisco. Matt brought over an East Bay team for a mini-tournament in May 2012 (the “Kiddush Cup”) and there seems to be a great interest in having more teams join the fun.

It turns out there are several East Bay congregations who also have teams. I joined the Kol Shofar team in an away game against an East Bay All Star team last summer. They were glad to host us and even provided bagels! 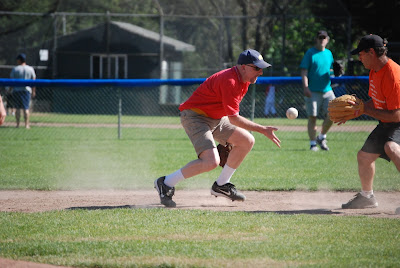 While everyone likes to win, it isn’t about the wins and losses. Although we do have umpires and keep track of the score, the emphasis is on being outdoors, getting exercise, and having a Jewish communal experience around a game of softball. 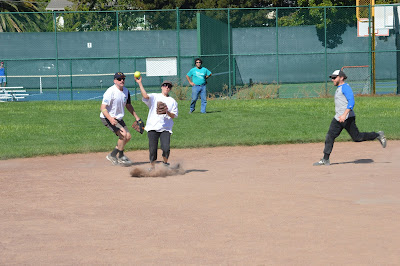 The fun is in the moments of the game when exciting things happen. Someone gets a hit or makes a great catch and there are high fives all around. There have been comebacks, disappointments, and lots of smiles along the way. We play as Team Rodef Sholom and the community comes together and supports each player in their moment at the plate or when the ball comes their way on the field. 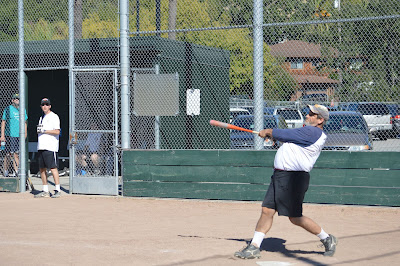 We don’t have a “Murderer’s Row” of hitters and there are no Hank Greenbergs or Sandy Kofax’s on our team. In fact the line up is different just about every game. And that’s the point of it all. To give everyone a chance to join in on the fun.

One player is in his 60s, one player had a baby last year, new players join the team every game, and in one game we had three father-son combos on the field including Cantor David Margules and his son Benny.

I remember the days when Cantor David would cheer on his son during Little League games with a rousing “Let’s go Benny baby!”

When the game is over both teams line up for high fives and we pose for a photo to commemorate the moment.


After our last game players from both teams went out for a drink to salute one player whose wife was home struggling in her life with cancer. For him, going out for a couple of hours and playing ball was a welcome distraction from the trying times at home.

I hope that many years from now other members of the Rodef Sholom community, perhaps even the grandchildren of members of our team this year, will look back at all this and say that they were glad we started this tradition of Jewish baseball fun.

For now, I am simply pleased and proud to be a part of it all and I know my Dad would be too.

To find out more about Si Lakritz visit the Lakritz Family Scholarship page.

The Sweetwater Music Hall is a tiny venue in downtown Mill Valley with a long history of musical performances dating back to it's opening days in 1972. Like most musical shows these days you see plenty of people with their cell phones shooting pictures and video all night.

In your face use of cell phones at concerts is funny and irritating at the same time. It's funny when you think about whether or not these people are actually paying attention and enjoying the concert. It's irritating for other concert goers and the artists who want to just experience the show.

So it came as no surprise when Maria Muldaur blurted out her desire for people to put down their phones by saying "Be Here Now" -- quoting Ram Dass. Of course the crowd cheered Muldaur's reprimand.

Another way of thinking about this phenomenon is that people (especially celebrities) don't want candid photos or videos of them ending up online. In a blog entry back in 2010 Digital Forgiveness vs. The End of Forgetting, I spoke about how these images and videos can be very difficult, if not impossible, to remove after the fact. Indeed, according to George Washington University law professor Jeffrey Rosen, many bars, nightclubs, and even private party hosts now require visitors to sign agreements not to tweet or otherwise post information about other guests and whatever is going on there that night.

Rosen also talks about a Pew study showing that more 18-to-29-year-olds are concerned about their online portfolios than older adults are because they understand the consequences of over sharing.

It wasn't long before the phones came out again. Most people were at least nice enough to wait until Muldaur left the stage.

Which brings me back to why it is that so many people do this now days. Throughout the show I had been thinking the same thing myself. I wanted to enjoy the show and didn't want to bother anyone behind me if I decided to pull out my phone and shoot some video.

For me the urge to capture part of the show was not just to be able to share it with friends online. The video would help me remember the show and re-live some of the brilliant performances. It's what people do now.

The Grateful Dead were pioneers in allowing and actually encouraging live recordings of their musical performances. In what can now be seen as being way ahead of their social media times, the Dead allowed the recordings in order to maintain and, in fact, improve their fan base and ticket sales.

Today, if you do a YouTube search for Sweetwater Music Hall you receive a seemingly endless list of amateur and professional live video recordings from this venue. Included in that list are the two short clips I recorded last Friday night. Although not very professional, the video I shot is a nice piece of the evening I can share with the world and use to help me remember the show.

On the other hand, Muldaur is going to simmer in her disdain for the practice of fans putting their phones in her face whenever she's on stage.

Perhaps someday she will appreciate the recordings of her shows or at least be able to acknowledge the fact that people liked her performance enough to want to capture it and share it with others.

Click here to see another clip from that amazing show. Enjoy!

Posted by Brad Lakritz at 1:43 PM No comments: